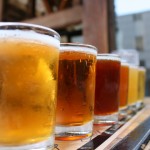 Here’s a new entry for best way to get out of a drunk driving charge: It’s not my fault — it’s the fungus in my gut.

A judge in Hamburg, New York, has dismissed a driving while intoxicated case against a 35-year-old school teacher after her attorney claimed that she had “auto-brewery syndrome,” a severe infection in her intestines that supposedly pushed her blood alcohol levels to nearly four times the legal limit for driving.

The woman was pulled over in October 2014 and blew a 0.33% blood alcohol level on a Breathalyzer, according to the Buffalo News. The legal limit to drive in New York is 0.08%.

The woman insisted that she’d had only three drinks, and had stopped drinking an hour and a half before driving. Alcohol metabolism varies widely between individuals, but for women, a drink generally increases blood alcohol content by .025% to .045%.

The woman’s lawyer, Joseph Marusak, told the Buffalo News that she tested herself several times using a Breathalyzer in the months after the arrest, and also was tested by nurses over the course of 12 hours while abstaining from booze. Her blood alcohol regularly registered over 0.2%, he said.

The condition has been the subject of several published studies, each following one or two people with the disorder. Independent experts say that it’s probably a real condition, though extremely rare.

So how does it happen? The leading theory is that the syndrome stems from an imbalance of microbes in a person’s intestines, leading to an overgrowth of yeast. When an affected person eats food that’s rich in carbohydrates — such as sugar or alcohol — the yeast has a feast, multiplying and producing lots of ethyl alcohol, which then makes its way into the bloodstream.

Most people don’t have tons of yeast in their gut, so they don’t make excessive amounts of alcohol. But it’s not implausible that a few people do, Eric Martens, an assistant professor of microbiology at the University of Michigan, told BuzzFeed News by email. “My guess is it’s pretty rare, but there are always surprises in nature and medicine.”

Barbara Cordell, head of nursing and health sciences at Panola College in Texas, discovered the condition after her friend started acting drunk without drinking anything. The friend was kept under strict observation at a hospital for 24 hours, and his blood alcohol level rose throughout the day.

Cordell told the BBC that she estimates about 100 people have auto-brewery in the United States. Dozens of cases have been reported in Japan, where about 85% of the population has a gene that slows the natural breakdown of alcohol in their bodies.

In 2014, a British man, Matthew Hogg, made the rounds at media outlets to raise awareness about the condition, which he says often gives him severe hangovers and has forced him to go on disability.

But no one knows for sure about the cause of the condition because so little research has been done. The handful of studies that do exist have found that people with unexpectedly high levels of blood alcohol also tend to have high levels of yeast — particularly Candida albicans and the brewer’s yeast Saccharomyces cerevisiae — in their guts.

The New York woman’s doctor, Anup Kanodia, a general practitioner in Westerville, Ohio, told BuzzFeed News that he has treated about 10 people for auto-brewery syndrome in the last few years. About half of them came in after a DWI, he said, though the youngest was 13 years old. All claimed that they register high levels of blood alcohol without drinking.

“Could someone fool everything? They probably could,” Kanodia said. But a person would have to drink a lot of alcohol to get to such a high blood level — enough that it would be extremely difficult to hide, he added.

Kanodia took stool samples from these people to check for yeast in their intestines. They all had significantly higher yeast levels than typical people do, he said.

Kanodia is a medical doctor and also practices alternative medicine. He associates the symptoms of auto-brewery with “leaky gut,” when the cells lining the intestines become too permeable, allowing large molecules to get into the bloodstream. This condition is not recognized by most mainstream doctors, but has been used by the alternative medicine community to explain everything from irritable bowel syndrome to autism.

But some experts question whether auto-brewery syndrome could lead to such high alcohol levels. Toxicologists Barry Logan of NMS Labs in Pennsylvania and Alan Wayne Jones of Sweden’s Linköping University have proposed that the syndrome stems from a rare combination of a serious yeast infection and an inability to metabolize alcohol.

Because it would take a huge quantity of yeast to make enough alcohol to get you drunk, these researchers concluded that most, if not all, people with DWIs likely got them in the usual way — by drinking and driving.

Kanodia said that he is working with five other defense attorneys who are using auto-brewery as a defense for their clients.

The doctor admitted that people with high blood alcohol shouldn’t drive, no matter how they got there. But he says about 70% of his patients have seen significant improvement with various treatments, including probiotics, dietary changes, prescription antifungals, and supplements with antifungal properties, such as oregano oil.