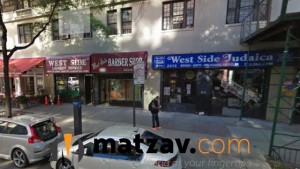 A man claiming to be Muslim assaulted a Jewish bookstore manager in Manhattan while yelling “[expletive] the Jews.”

The alleged assailant, an African-American man in his 20s, struck the West Side Judaica employee in the face on Monday afternoon, reports the Times of Israel. No injuries were reported.

The victim, 52, told police that he saw the alleged assailant pacing outside the store and stepped outside to find out what he wanted before he was attacked. The assailant, who escaped on a scooter, has not been caught. The New York Police Department’s Hate Crimes Task Force is investigating.

Established in 1934, West Side Judaica is one of only a few remaining freestanding Judaica stores in Manhattan.