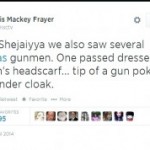 Janis Mackey Frayer, a correspondent for Canada’s CTV now based in Gaza, on Sunday reported seeing a Hamas fighter dressed in woman’s clothing in Shuja’iya, the scene of heavy fighting between Israeli forces and Hamas.

“Inside Shejaiyya we also saw several #Hamas gunmen. One passed dressed in a woman’s headscarf… tip of a gun poked out from under cloak”, Frayer wrote.

At the time of publication her post had been re-tweeted 488 times and “Favorited” 95 times.

The tweet elicited tens of responses, some supportive and others critical.