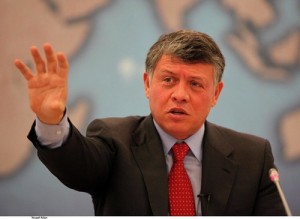 According to Israel’s Channel 10, which cited unnamed Jordanian sources, Abdullah fears that an uprising in the West Bank could spill over to Jordan, which has a majority-Palestinian population.

Abbas, who has been accused of incitement by Israeli leaders, is scheduled to travel to the Jordanian capital of Amman over the weekend to meet with U.S. Secretary of State John Kerry and Abdullah. Kerry has stated that one of his goals is to reinforce maintaining the status quo on Jerusalem’s Temple Mount. Jordan oversees the Islamic Waqf, a religious trust that administers the Temple Mount.

Meanwhile, the Quartet of Middle East peace mediators, which includes the U.S., E.U., Russia, and the U.N., met in Vienna on Friday and urged both the Palestinians and Israelis to tone down their rhetoric and ease tensions. The group called on Israel “to work together with Jordan to uphold the status quo at the holy sites in Jerusalem in both word and practice.”