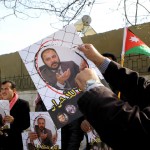 A Muslim Brotherhood spokesman says Jordan has released the No. 2 figure in the opposition group after he served two-thirds of an 18-month prison term for criticizing the United Arab Emirates, an ally of the kingdom, the AP reports.

Zaki Bani Ersheid’s release comes at a time of growing divisions in the Jordanian branch of the pan-Arab Brotherhood, weakening its long-time role as the main political opposition.