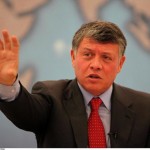 King Abdullah II and other Jordanian government officials are working to prevent the Israeli Knesset from passing a bill that would permit Jews to pray on the Temple Mount, the Palestinian Ma’an News Agency reported Tuesday.

“Such flagrant and aggressive attacks will drag the region into a religious conflict that will subvert the peace prospects and fuel extremism, terrorism and violence in the region,” Judeh was quoted as saying by Jordan’s Petra news agency.