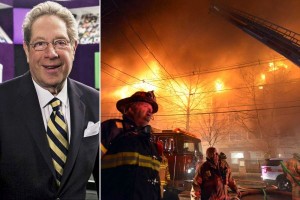 Sterling said that after watching video of the inferno on the 10 o’clock news, he saw that the fire struck the side of the Avalon at Edgewater where his apartment was located.

“There are two sides to the building, and unfortunately for me the fire is on my side,” said Sterling, who until 10 had not been able to see video of the inferno because the hotel where he has taken shelter does not carry local cable news channels.

“I would expect there would be nothing left,” he said.

See videos of the fire HERE, HERE AND HERE.

Sterling said he was not as concerned over the loss of his memorabilia as he was with more mundane needs such as his clothes.

“I’m not a memorabilia person, so that doesn’t bother me,” he said. “Even my kids’ pictures; I’ll get other pictures. You can say, well there’s that picture of you and [Bill] Clinton and you and [George] Bush and [Rudy] Giuliani, but that’s not a big thing to me. I would like to have my clothes and my passport and my bags. But what are you going to do?”

He said all he has is the shirt, sweater and jeans he was wearing when he evacuated.

Mostly, he was thankful there reportedly were no injuries. The cause of the fire was not immediately known.

“The good thing is that they got everyone out — that’s a great thing,” he said. “You can always buy clothes and things. But you never think it will happen to you. I have to start from the beginning.”

Sterling said, “I’ve teared up about 20 times,” both thinking about families with children that have been displaced as well as the outpouring of concern for him from around the country.

“I walked in, smelled smoke and my elevators were shut off,” Sterling said. “I went to another elevator and went up and at some point I couldn’t see, the smoke was so bad.”

Sterling added, “If you want to say there’s something lucky, it’s that this didn’t happen at one or two or three in the morning.”

Sterling has not missed a Yankees game since 1989 and is scheduled to return for the 2015 season.

He called the support he received in the hours after the fire “a wonderful thing.”

“I get teary when people are nice to me, so it’s been a great outpouring for me,” he said. “I just feel sorry for all the families with little kids, dogs. They all have to go somewhere.”