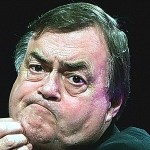 Lord Prescott said any other country would be made an international “pariah” if it acted in the same way, as the reported death toll from the offensive against Hamas reached four figures, mainly civilians.

And he directly compared the situation in Gaza with a concentration camp, suggesting the Nazi Holocaust should “give Israelis a unique sense of perspective and empathy with the victims of a ghetto.”

Writing in the Sunday Mirror, Lord Prescott said: “Imagine a country claiming the lives of nearly three times as many as were lost in the MH17 plane tragedy in less than three weeks.

“A nation which blasted a hospital, shelled and killed children from a gunboat as they played football on the beach and was responsible for 1,000 deaths, at least 165 of them children, in just two weeks.

“Surely it would be branded a pariah state, condemned by the United Nations, the US and the UK. The calls for regime change would be -deafening.

“But these howls of protest are muted. The condemnation softened. For this is Israel.”

He continued: “Israel’s hawkish Prime Minister Benjamin Netanyahu trots out the same excuses. Hamas ‘militants’ in Gaza fired their rockets first. Israel has a right to defend itself. It needs to protect its citizens.

“And he’s right on all three counts – but as always with Israel this is not the full story. The military action supposedly targeting Hamas is so brutally disproportionate and so grossly indiscriminate that it makes it impossible not to view Israel’s actions as war crimes.”

He said Hamas was wrong to fire rockets and should recognise Israel’s right to exist, but suggested a violent response was inevitable.

“Israel brands them terrorists but it is acting as judge, jury and -executioner in the -concentration camp that is Gaza,” he said.

“What happened to the Jewish people at the hands of the Nazis is appalling. But you would think those atrocities would give Israelis a unique sense of perspective and empathy with the victims of a ghetto.”