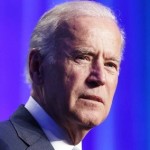 [Video below.] Vice President Joe Biden will not run for president in next year’s election, he said in an address to the country a short while ago.

His decision follows weeks of speculation among voters about whether he would join four other Democrats on the campaign trail to the White House.

Biden, 72, repeatedly said he wouldn’t run in the election unless he had the energy and full emotional support from his family. His son, Beau, died in May from brain cancer.

Despite not declaring his intent to run for president, though, recent polls showed Biden as a leading choice for the next leader of the United States among Democrats. A national Bloomberg Politics poll released late last month found that 47 percent of those polled said they wanted Biden in the race. A Quinnipiac University poll published in August found that he would outperform former Secretary of State Hillary Clinton, who is viewed as the general front-runner, in a general election against real estate mogul Donald Trump and other Republican hopefuls.

In June 1987, Biden formally declared his first presidential candidacy for the Democratic nomination. But three months later, he withdrew from the race and continued with his work as a U.S. senator. Twenty years later, he launched a second bid for his party’s nomination, but soon dropped out after securing only 1 percent of the delegates in the Iowa Democratic caucuses. In August 2008, now-President Barack Obama announced that Biden would be his running mate as vice president.