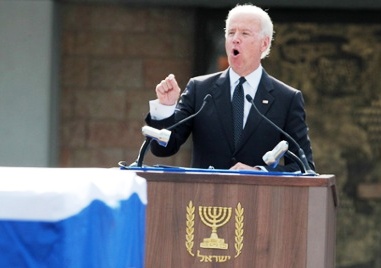 The following is the text of the Vice President’s speech at the funeral of Ariel Sharon:

When a close-knit country like Israel, a country that has been tested as much as Israel, loses a man like Prime Minister Sharon, it doesn’t just feel like the loss of a leader, it feels like a death in the family. And many of my fellow Americans, some of whom are here, feel that same sense of loss.

I say to Prime Minister Sharon’s beloved and devoted sons, Omri and Gilad, and the entire family, particularly the sons who spent so much time caring for their father in the last few years, it’s a great honor you’ve afforded me on behalf of my country to bring the sympathies of the President of the United States and the American people on this occasion.

To you, to Prime Minister Netanyahu and the government of Israel, to President Peres, and to the grieving men and women of the nation of Israel, but most particularly to his beloved IDF, his fellow warriors, I fear an attempt to capture him and what he stood for is beyond my capabilities. I knew him for over 30 years. He was not only a powerful man, he was a powerfully built man. And as a young senator, when you first met him you could not help but understand, as they say in the military, this man had a command presence. He filled the room.

The first time I was invited to his office, he said to me — and I remember thinking, is he serious? — he said, Senator, you are mostly welcome. I didn’t know if it was a matter of something being lost in translation or whether he was pulling my leg, as we say in the States, until I spent a few moments with him and realized how incredible his hospitality was. But when the topic of Israel’s security arose, which it always, always, always did in my many meetings over the years with him, you immediately understood how he acquired, as the speakers referenced, the nickname “Bulldozer.” He was indomitable.

In talking about his spiritual attachment to the land of Israel back in an interview in the late ‘90s, he said, and I quote, “Before and above all else, I am a Jew. My thinking is dominated by the Jews’ future in 30 years, in 300 years, in a thousand years. That’s what preoccupies and interests me first and foremost.” And because he possessed such incredible physical courage — and I would add political courage — he never, never, never deviated from that preoccupation and interest, as he referred to it. It was his life’s work that even someone on the shores hundreds of — thousands of miles from here could see, could smell, could taste, could feel, and when you were in his presence there was never, never any doubt about it.

The physical courage he had to lead men straight into enemy lines and deep behind them. I remember, as a young senator, that iconic picture of him with that bandage around his head, standing there after a decisive victory, which seemed to symbolize, as Bibi — as the Prime Minister said, an Israel that had reclaimed its roots of standing up and fighting, needing no help, standing on its own. The political courage it took, whether you agreed with him or not, when he told 10,000 Israelis to leave their homes in Gaza in order, from his perspective, to strengthen Israel. I can’t think of much more controversial; as a student of the Jewish state, I can’t think of a much more difficult and controversial decision that’s been made. But he believed it and he did it.

The security of his people was always Arik’s unwavering mission, an unbreakable commitment to the future of Jews, whether 30 years or 300 years from now. We have an expression in the States: never in doubt. Arik was never uncertain from my observation. I don’t know him nearly as well as the Israeli people and his colleagues, but he seemed never in doubt. But there were times when he acted, and those actions earned him controversy and even condemnation. And in certain instances, American leaders — American Presidents — had profound differences with him, and they were never shy about stating them nor was he ever shy about stating his position. As I said, from my observation he was a complex man, but to understand him better I think it’s important history will judge he also lived in complex times, in a very complex neighborhood.

Since he passed away, in the days ahead, there will be much written about the Prime Minister. And it’s right for the Israeli people to reflect on all aspects of his life — the triumphs as well as the mistakes, taking full measure of the man, the arc of his life. For I would argue the arc of his life traced the journey of the State of Israel.

And no one in any corner of this world has any doubt about where America stands with regard to Israeli security, the independent State of Israel that is the ultimate refuge for Jews wherever they are in the world. And that will never change.

As President Obama said when he was here in Jerusalem last year, and I quote, “Those who adhere to the ideology of rejecting Israel’s right to exist, they might as well reject the earth beneath them and the sky above because Israel is not going anywhere. So long as there is a United States of America, you are not alone.”

For his part, Arik Sharon greatly valued that close friendship between the United States and Israel, and particularly during his years as prime minister, he worked hard to deepen our relationship.

I find it fascinating, maybe it’s I’m getting older — I find it fascinating how some look at Israel today and say its success was inevitable. Why didn’t everyone understand this was just inevitable? But at the outset it was anything but inevitable. It was the opposite of inevitable. Israel’s very survival was against all odds. But thankfully Israel was blessed with a founding generation that understood exactly what it took to overcome those odds. So many of that generation, because of the people of the United States, I have the great honor of personally meeting and getting to know. I did not know David Ben Gurion, but I knew all but one — every Prime Minister since that time.

President Peres, you and Prime Minister Sharon are part of one of the most remarkable founding generations in the history not of this nation, but of any nation. Historians will look back and say, but for — but for — the rare and unique men and women at that moment, but for that it’s hard to see how we’d be standing here on this day — leaders like David Ben Gurion, Golda Meir, Menachem Begin, Yitzhak Rabin, the list goes on, and you, Mr. President, you all had one thing in common from an outside observer’s perspective, despite your political differences, it was that you knew in your bones, as one Israeli Prime Minister told me over 35 years ago when I was opining of the difficulty Israel faced surrounded by hostile neighbors at the time, looked at me and said, Senator, don’t worry. We Jews have a secret weapon in our struggle in the region. We have nowhere else to go.

That realization, it seems to me, is what energized your entire generation of leadership. I believe that’s one of the reasons by Arik Sharon and so many others fought so hard their whole lives.

Prime Minister Sharon was not only loved by the Jewish people, he not only loved them — the Jewish people — but he loved the land of Israel. Not just the idea of it, but the actual land itself. Born on a farm, about to be buried on a farm, a ranch, I remember one of the meetings I had with him. It was a somewhat heated, and he had his maps. And he spread them out in his office again. And I somewhat irreverently said, Mr. Prime Minister — I said, do you want me to do it, or are you going to do it? Because I had heard his presentation many times. And in the midst of it, he looked at me, and he said, let me tell you about the new calf that I just got on my ranch. And he started talking about a calf.

Ladies and gentlemen, the Book of Genesis says, “Arise and walk the length and breadth of the land.” Arik Sharon did just that. He tilled it as a farmer. He fought for it as a soldier. He knew every hilltop and valley — every inch of the land. As I said, he loved his maps. He used to come to the meetings with maps of the land rolled up under each arm. They were always maps.

I’m reminded — my mother’s blessed memory, I’m reminded of — if you’ll forgive me — an Irish poet, an Irish writer. I’m sure Prime Minister Blair will forgive me. That Irish writer was James Joyce. And he said, “When I die, Dublin will be written on my heart.” I am absolutely sure the land of Israel, the Negev is etched in Arik Sharon’s soul as it was written on Joyce’s heart.

And the defining attributes of this great man’s character — passion for the Jewish people, physical and political courage, and love of this land — they have all played out on the canvas of the State of Israel’s historic trajectory.

Arik Sharon’s journey and the journey of the State of Israel are inseparable. They are woven together, in war, in politics, in diplomacy.

Toward the end of his life, he said, I’ve been everywhere. I’ve met kings, queens, presidents. “I’ve been around the world. I have one thing that I would like to do: to try to reach peace.”

We’ll never know what the ultimate arc of Arik Sharon’s life would have been had he been physically able to pursue his stated goal. That will be for historians to speculate and debate. But we do know this: As prime minister, he surprised many. I’ve been told that, in reflecting on the difference between how he viewed things as a general and as prime minister, he would paraphrase an Israeli song lyric that said, things you see from here, look different from over there. What would have — what would they have looked like had he lived in good health and led those eight years?

He left us too soon, but the work of trying to reach peace continues. And to quote Shakespeare: He was a man, take him all in all, we shall not look upon his like again.

May the bond between Israel and the United States never, ever be broken.