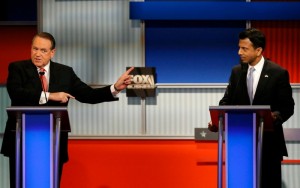 “If we send another big government Republican to the White House, we will not do enough to fix what is wrong in this country,” Jindal said, pivoting his attention to Christie in response to a question on the Trans-Pacific Partnership trade deal. He claimed that it is incumbent on the GOP to elect a “true conservative” to the White House.

“I complimented Bobby,” Christie said, shrugging off the attack. “Imagine how much time he’d want if I actually criticized him.”

“Mike, with all due respect, I admire your social views, I share many of those views,” Jindal said testily. “Your record as governor tells a different story. During your time as governor, spending in Arkansas went up 65 percent, the number of state workers went up 20 percent. Taxes for the average citizen went up 47 percent.”