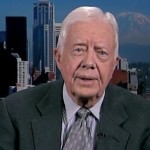 Former President Jimmy Carter marked his 90th birthday today with a lengthy interview on CNBC Meets where he discussed his one term in office and the one thing he would have handled differently – the Iran Hostage Crisis.

Carter suggested Operation Eagle Claw, a failed 1980 attempt to rescue the hostages taken by Iranian revolutionaries at the U.S. Embassy in Tehran, could have been successful if he committed one more helicopter to the mission.

“I think I would have been re-elected easily if I had been able to rescue our hostages from the Iranians,” Carter said. “And everybody asks me what would do more, I would say I would send one more helicopter because if I had one more helicopter, we could have brought out not only the 52 hostages, but also brought out the rescue team, and when that failed, then I think that was the main factor that brought about my failure to be re-elected. So that’s one thing I would change.”

Operation Eagle Claw was aborted after three of the helicopters taking part in the mission experienced mechanical problems.