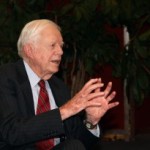 Jimmy Carter said he has four “very small” cancer spots on his brain and will recieve radiation treatment as soon as this afternoon. The former president announced his diagnosis at Emory University Hospital at a press conference Thursday.

Carter, 90, said doctors first found cancer on his liver and removed about 10 percent of the organ.

The brain cancer is a melanoma, which is typically found on the skin, but can occur inside organs.

Carter said he will dramatically reduce his work at the Carter Center and his grandson will take on a larger role there.

Carter told reporters that at first he believed he had just “a few weeks left,” but is now at ease. “I’ve had a wonderful life,” he said. “I’ve had thousands of friends.” Read more at USA Today.