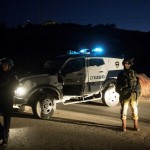 An Israeli toddler, 4, was lightly injured on Motzoei Shabbos when Jewish teenagers, seeking to stone Palestinian cars, threw a rock at the vehicle he was in near Chevron, the Times of Israel reports.

The boy was hurt by glass shards from a shattered window.

The IDF later arrested two Jewish minors from the settlement of Kiryat Arba in connection to the rock attack. The teenagers reportedly told soldiers they had sought to stone Palestinian cars.

The Israel Police said it was taking the case “very seriously” and had launched an investigation.