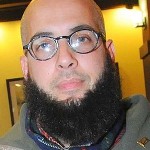 A New Jersey man who used his Islamic organization’s Web site to advocate violence against those whose ideals he found offensive to his religion was sentenced Friday to 21 / 2 years in prison – a term that a federal judge said he imposed so people would “understand the line” between free speech and criminal calls for violence.

An Orthodox Jew who converted to Islam, Yousef al-Khattab, 45, renounced his postings during the hearing in federal court in Alexandria, asking U.S. District Judge Liam O’Grady to hold him responsible only “for what I say, not how other people understood it.”

Derisively calling himself a “clown” and “the Gilbert Gott­fried of the Muslims,” Khattab said he did not intend to incite violence but would not make the postings today that he did years ago.

“I look back now, and I’m very wrong,” Khattab said.

Court records show that in 2009, Khattab posted a photo of the headquarters with a link to a map and noted that the main temple was always full at prayer times. In another post that year, he told readers to seek out leaders of Jewish organizations in the United States and “deal with them directly at their homes,” court records show.