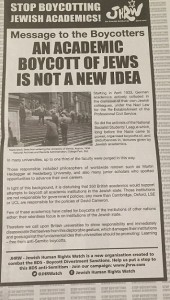 The UK-based group Jewish Human Rights Watch placed an ad in the Guardian on Friday calling on British universities to distance themselves from another ad earlier this week calling for an academic boycott of Israel.

Jewish Human Rights Watch said their ad “educates the Boycotters on how their call for a boycott of Jewish academics and outright support for the BDS (Boycott, Divestment and Sanctions) is sheathed anti-Semitism,” in a press release on Friday coinciding with the ad’s publication. The group said BDS was partly responsible for the apparent rise in antisemitism in Britain.

“We call upon the named universities involved in this hoodwinked attempt at anti-Semitism, to dissociate themselves from these so-called academics. We urge the universities to see the truth,” the group said.

This latest effort is part of the group’s longer campaign against the BDS movement in England. Earlier this year, the group petitioned the High Court of Justice to review a local government’s decision to boycott Israeli goods — specifically those produced in the West Bank.

Some 343 British academic professionals signed the ad earlier this week calling for divestment from Israeli academia in solidarity with Palestinian national aims. Some were from prestigious institutions like Oxford and Cambridge.

You can read the text of the full JHRW advertisement, printed in the Guardian, below:

Starting in April 1933, German academics actively colluded in the dismissal of their own Jewish colleagues, under the Nazi Law for the Re-Establishment of the Professional Civil Service.

So did the activists of the National Socialist Students’ League which, long before the Nazis came to power, organised boycotts of, and disturbances in, lectures given by Jewish academics.

In many universities, up to one third of the faculty were purged in this way.

Those responsible included philosophers of worldwide renown such as Martin Heidegger at Heidelberg University, and also many junior scholars who spotted opportunities to advance their own careers.

In light of this background, it is disturbing that 350 British academics would support attempts to boycott all academic institutions in the Jewish state.

Therefore we call upon British universities to show responsibility and immediately disassociate themselves from this deplorable gesture, which damages their institutions and goes against the fundamental idea that universities should be promoting: Learning – free from antisemitic boycotts.