An international Jewish organization is offering a cash reward for information leading to the arrest of the perpetrator of yesterday’s stabbing attack of a frum Jew in Crown Heights, Brooklyn.

The Anti-Defamation League announced it would pay $5,000 for such information.

The NYPD is searching for a black male who fled the scene after stabbing 25-year-old Yehuda Brikman outside of a check-cashing center in Crown Heights. Yehuda is being treated for stab wounds to the back in Kings County Hospital, where his condition was stabilized. 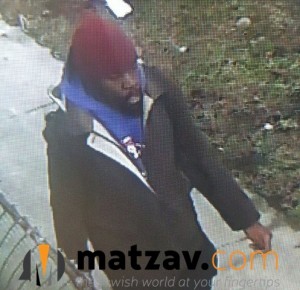 The attack is being investigated as a possible hate crime by the NYPD’s Hate Crimes Task Force.

“He was dressed in Hassidic garb. Right now we’re looking at it as a possible hate crime because he’s dressed in that fashion,” Chief of Detectives Robert Boyce told the New York-based radio station 1010 WINS.”

The NYPD released a surveillance photo of the man fleeing the scene and CBS New York described him as a black man, 20-30 years old, who is 5’10” and 180 pounds. He was last seen wearing a dark-colored jacket, blue hooded sweater, dark colored pants and black boots.

“This alleged hate crime is just one in a series of traumatic attacks over the past several months in which Jews across the city, especially in Brooklyn, have been singled out for violence,” they added. “While we have not documented a rise in the overall numbers of antisemitic incidents in New York City, we are seeing a troubling pattern in which members of the Jewish community in Brooklyn are experiencing the worst kind of antisemitism. Enough is enough.”

Bernstein and Frackman said community leaders, religious leaders and elected officials must “make clear with increased vigor” that crimes motivated by antisemitism and bigotry are not acceptable. They said taking a stand against acts motivated by bias or prejudice against any group is “a critical step in reducing the probability of incidents recurring.”

A source in the NYPD said that additional security personnel will be placed in Crown Heights, covering the area of the attack and around schools and other high-alert locations in the neighborhood.