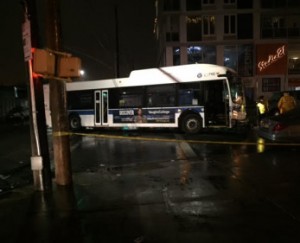 A 62-year-old Russian Jewish female has died after she was struck by a MTA Bus Monday evening in Sheepshead Bay, Brooklyn, police said.

The Incident happened at 5:55 p.m. when Eleonora  Shulkina was crossing the street at East 17th Street and Avenue Z, when she was hit by B36 MTA bus, EMS responded to the scene and transferred the victim to Coney Island Hospital in critical condition.

The driver of the bus stayed on scene and is being interviewed by detectives.

A investigation by the NYPD’s Highway Collision investigation squad revealed that the MTA Bbus was travelling eastbound on Avenue Z where it made a left turn onto East 17 Street and struck the 62 year-old female as she crossed East 17 Street from the east side to the west.

This Incident is the fifth fatal pedestrian that was killed by MTA bus in the recent weeks.