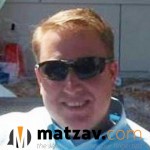 A Jewish tech entrepreneur who lived out of rental cars was shot and killed in a Las Vegas parking lot, JTA reports.

Neil Gandler, 42, was shot by two burglars on Dec. 29 while sleeping in a rented car in a gym lot during a failed robbery attempt, the Las Vegas Review-Journal reported.

A man and woman have been arrested in the killing and are facing charges of first-degree murder.

Gandler, a blogger and software entrepreneur living in Palo Alto, California, was in Las Vegas to attend the CES global consumer electronics trade show. He had been living out of rented cars for 10 years after rental prices skyrocketed in San Francisco after the tech boom of the early 2000s. He lived a mobile life and showered at 24 Hour Fitness gyms, JTA reports.

Gandler, a native of Brooklyn, New York, grew up on suburban Long Island.