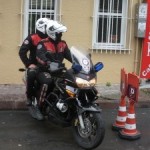 A prominent Jewish couple were found stabbed to death in their home in Istanbul, Turkey on Friday, the country’s Hurriyet Daily News reported.

Police found the bodies of Jak Karako, 77, and his wife, Georgia Karako, 69, at their apartment in the city’s Ortaköy neighborhood.

It is unclear what the motive behind the killing was, but the couple’s caretaker has fled and is considered a suspect in the murder, according to the report. Police have surrounded the crime scene and are in the process of questioning locals.

A source with knowledge of the community, who did not wish to be named, told The Algemeiner, “There is some level of mistrust against the government as a result on recent anti-Semitic incidents. Some believe that the truth about the couple’s murder will never come out, but it will be some manipulated version of what had happened.”

“There have been several reported murders of Turkish Jewish businessmen throughout the past several years, but these incidents were either never solved or were blamed on some small local disputes which the community always looked at with suspicion,” the source said.

“Karako was one of the founders of Ören Bayan, the most famous yarn brand in Turkey,” Hurriyet said. “Famous actresses, like Türkan Şoray, have played in the brand’s TV ads. Moiz Dana, the other co-founder, died while travelling to the United States in 2009. The sons of Karako and Dana had taken over the company from their father in the 1990s. The families later sold the company due to financial troubles.”

In recent years the climate in Turkey has become increasingly threatening for the country’s Jewish population. Various violent attacks on individuals have been reported and vicious anti-Israel rhetoric is widespread.