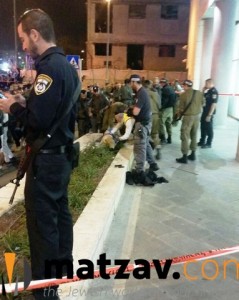 The Israeli Police continue to investigate an incident according to which a Jewish citizen was shot to death after being identified as a terrorist by mistake. The initial investigation indicated that the man called out “I am ISIS” when he was confronted by armed IDF soldiers. Other details about the 27-year-old young man have also emerged.

The 27-year-old Jerusalemite that was shot to death worked in the past as a security guard for a kindergarten. He made aliyah from Russia, studied in a Yeshiva in Jerusalem, and served in the past for the IDF in the Charedi Unit. He lived in a room at a yeshiva but about a month and a half ago, left.

The bus driver tried to help take control of the man but despite this, the man continued onwards until he seized the weapon of one of the soldiers. During this struggle, the man called out to the soldiers: “I am ISIS.” Security Forces that arrived at the scene fired at the man that was fighting with the soldiers. After he was killed, it was only then it became known that the suspect was a Jewish man from Yerushalayim.