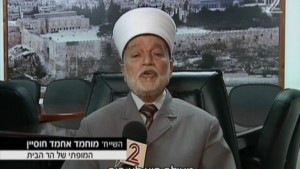 The grand mufti of Jerusalem, the Muslim cleric in charge of the Al-Aqsa Mosque, said Sunday that there has never been a Bais Hamikdosh atop the Har Habayis and that the site has been home to a mosque “since the creation of the world.”

Sheikh Muhammad Ahmad Hussein said in an Arabic interview with Israel’s Channel 2 that the site, considered the third holiest in Islam and the holiest to Jews, was a mosque “3,000 years ago, and 30,000 years ago” and has been “since the creation of the world.”

“This is the Al-Aqsa Mosque that Adam, peace be upon him, or during his time, the angels built,” the mufti said of the 8th-century structure commissioned by Caliph Abd al-Malik ibn Marwan.

Hussein has held the post of mufti since 2006; he was appointed by Palestinian Authority President Mahmoud Abbas. He has previously endorsed suicide bombings against Israelis.

He vehemently denied that there has ever been a Bais Hamikdosh atop the Har Habais, despite rich archaeological and textual evidence to the contrary, including from Muslim sources. The 10th-century Muslim historian Muḥammad ibn Aḥmad Shams al-Din al-Muqaddasi wrote in his description of Syria and Palestine that “in Jerusalem is the oratory of David and his gate; here are the wonders of Solomon and his cities,” and that the foundations of the Al-Aqsa Mosque “were laid by David.” Read more at Times of Israel.