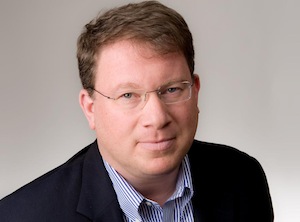 Goldberg interviewed Obama last week, with his scoop published on the eve of Israeli Prime Minister Benjamin Netanyahu’s Oval Office meeting on Monday, as well as preempting the prime minister’s appearance at the 2014 AIPAC Policy Conference on Tuesday.

In an interview with Bloomberg View talk show host Charlie Rose late on Wednesday, Goldberg said that he has been interviewing Obama on the subject of Israel for seven years, and has followed his “evolving views” on the Jewish state and Netanyahu.

Goldberg said Obama shows that he has “deep concern” for resolving the Israel-Palestinian Authority conflict, but as the current U.S.-brokered peace process approaches its self-imposed climax of a “framework agreement,” expected next month, Obama’s rhetoric is becoming less “diplomatic” and “more specific.”

“It’s not that the gloves are coming off, it’s that the mask of diplomatic language is coming off,” Goldberg said. Obama is “more specific about the problems he sees down the road for Israel,” about the demographics, “how Israel is going to cease to be a Jewish democracy at a certain point” and “how he’s having a harder time defending Israel in international organizations.”

Goldberg said it seemed to him to be a question of whether Obama was “unwilling or unable,” but the U.S. president made it clear that it was not because of a lack of willingness, describing the “undying” support America will always have for Israel.

Goldberg paraphrased Obama as saying, “Israel is growing more isolated and we can’t defend it in the same way.”

“I took it to be a little bit of a veiled threat, to be honest,” Goldberg said. “It’s almost up there with, you know, nice little Jewish state you got there, I’d hate to see something happen to it.”

“It was, look, I want to help you, but you’re not helping me help you, and, therefore, there’s only so much political capital I’m going to go spend in the UN, with the EU, with the Arab League, on your behalf,” Goldberg said. “I think it was all couched very carefully but it’s there and certainly the government in Israel feels like it’s there.”

When asked to describe the relationship between Obama and Netanyahu, Goldberg quipped, “Oh, it’s just filled with joy, very clearly.”

Rose described Obama as having “a certain grudging respect for the prime minister,” adding that Obama “said the prime minister is in a historic position because of his political skills to do things and he pays him that respect.”

Goldberg replied with a “theory” he thinks Obama shares.

“There are three seats in the Zionist pantheon, to mix paganism and Judaism for a minute,” he said. “There’s [Theodore] Herzl, who thought up the idea of modern Zionism; there’s [David] Ben-Gurion, who took Herzel’s idea and made it concrete, turned it into a state; and that third seat is still empty. That’s the person who makes Israel a permanent entity with permanent borders and recognition of its neighbors.”

Goldberg said that historic role was to be played by Yitzhak Rabin and then by Ariel Sharon. Neither fully achieved it and both of their careers ended early, with Rabin slain and Sharon falling into an eight-year long coma before passing away this year.

Goldberg said that, several years ago, Obama thought Netanyahu would leave the stage for Justice Minister Tzipi Livni. But “Obama’s thinking about [Netanyahu] has shifted to a remarkable degree, not about his politics, but about his staying power.”

“In this interview” with Obama, the president was both “boxing [Netanyahu] in” and “also bucking him up,” Goldberg explained. Paraphrasing Obama on Netanyahu, Goldberg said, “You’re the man, you’re the only one, you’re the guy,” to reach an historic accord with the PA.

Goldberg described the dynamics between U.S. Secretary of State John Kerry and Obama as a “good cop, bad cop” approach to propel the peace talks to the framework agreement.

He described Kerry as being “really indefatigable” in pushing the process forward, and his approach, which has been to note down all of Netanyahu’s concerns and try to resolve them one by one: Jordan River Valley security, recognizing a Jewish state, he began to list.

Goldberg also saw the harsher comments from the U.S. as a way to signal to the PA that Israel is also under pressure to make the deal, and that the U.S. is not simply taking Israel’s side.

He added that neither the Israeli nor PA negotiators have leaked details of the proposed framework agreement, jokingly saying he saw that as “the miracle in this.”

He did note that he had been told, via a second or third-hand source, how one of Kerry’s parries made Palestinian president Mahmoud Abbas “very upset.” The proposal was to extend the boundaries of East Jerusalem into an adjoining suburb so Israel could maintain the unity of Jerusalem while the PA could say its capital was part of the city.

On the question of whether the PA would recognize the Jewish state in a deal, Goldberg said it was “unrealistic” to expect them to give up their narrative in the opening round. To acknowledge that Jews are also from there would be to void the position of Yasser Arafat’s Palestinian Liberation Organization, the precursor to the PA, “that Israel is a colonial enterprise.”

“You can’t be a colonial enterprise if you are returning home,” Goldberg said.

On Iran, Goldberg said that Israel’s position, demanding “complete capitulation” to dismantle its nuclear program, was unlikely compared to a growing consensus for a status quo where Iran is perpetually six to eight months away from nuclear breakout.

He said that after backtracking on his “red line” for using military force in Syria, Obama’s threats to use military force against Iran are now being seen as toothless.

“I’m not bluffing, all options on the table, I got Israel’s back,” Goldberg paraphrased Obama saying, but that threat now seems hollow. He said that even “our Arab allies don’t really believe Obama would ever use force.”

“In fact, America’s adversaries are not scared of America’s president,” Goldberg said. “Do you really think they think you’re tough?… What does [Syrian President] Bashar al Assad have to do to his people before provoking any kind of American military response?”

With two and a half years left in his presidency, Goldberg listed Obama’s foreign policy achievements and pointed to how he might try to focus on checking the boxes on his list: killing Osama Bin Laden; pulling out of Iraq; if he can, removing all chemical weapons from Syria; and, even as Obama, himself, said the odds were just 50-50, to secure a nuclear agreement with Iran.

Resolving the PA’s claims against the Jewish state would be “the big enchilada” because of all the time and energy spent by previous U.S. presidents and world leaders to create a lasting peace in Israel, Goldberg said.