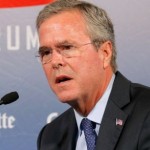 Jeb Bush slightly broke rank with his fellow Republican candidates on Monday, telling reporters in Orlando that his party should still hold a debate with Spanish-language network Telemundo, even though the RNC suspended its partnership with NBC and Telemundo for an upcoming primary debate.

“We should have the debate,” Bush said, reportedly in both English and Spanish. “I think we ought to have a Telemundo debate, or a Hispanic debate. It happened four years ago. Telemundo’s not part of the problem of CNBC. They [CNBC] just didn’t keep their word.” Read more at the Miami Herald.