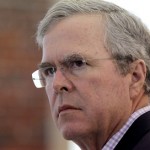 “Neither he nor Hillary Clinton can even say ‘Islamic terrorism,'” the GOP presidential candidate said Thursday on “Newsmax Prime.” “They cannot use the two words in a sentence.”

Clinton, the Democrats’ front-runner for president, declined to use the term “radical Islam” in Saturday night’s debate.

Bush said Obama and Clinton, Obama’s former secretary of state, created the refugee problem “by inaction, by red lines, by calling ISIS the JV team, by not supporting the Free Syrian Army, by withdrawing” from Iraq.