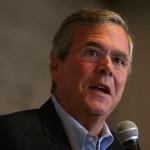 Former Florida Gov. Jeb Bush said Sunday that the United States should immediately declare war on ISIS in the wake of the horrendous terrorism attacks in Paris.

“This is viewed as a law enforcement exercise by the Obama administration. We should declare war,” Bush said on NBC’s “Meet the Press.” ‘Harness all the power that the United States can bring both diplomatically and militarily of course to be able to take out ISIS. We have the capabilities to do this. We just have to show the will.’

Bush said that the US should directly arm the Kurdish Peshmerga forces as well as put a large military force on the ground in Syria to directly engage the group known as the Islamic State.

“Declare a no-fly zone over Syria, directly arm the Peshmerga forces in Iraq, re-engage with the Sunni tribal leaders. embed with the Iraqi military, make safe zones in Syria, garner the support of our European allies, and the traditional Arab states. Lead!,” Bush said when asked to list the steps that should be taken.

“You take it to them, in Syria and Iraq. You destroy ISIS. And then you build a coalition to replace this radical Islamist threat to our country… with something that is more peace-loving,” Bush said. “We have to be engaged in this. This is not something that you can contain.”

The Republican presidential candidate, who is lagging in the polls, said the US has to take on both Syrian dictator Bashar Assad and ISIS.