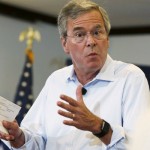 Republican presidential candidate Jeb Bush Tuesday slammed front-runner Donald Trump’s acumen on national security, accusing him of — among other things — being “ignorant and dismissive of the world’s most dangerous terrorist organizations.”

“And his bluster overcompensates for a shocking lack of knowledge on the complex national security challenges that will confront the next president of the United States.

“We are in serious times, and we need a president who will have the resolve to take on the terrorists and restore America’s position in the world,” Bush added. “Unlike Trump, I have offered strategies to confront Iran and combat the growing terrorist threat to our country.”

Trump, who continues to lead many national polls, has recently attacked former President George W. Bush, saying that he shared some responsibility for the 9/11 terrorist attacks. He also has slammed Jeb Bush throughout the campaign.