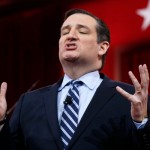 “There is no meaningful risk of Christians committing acts of terror. If there were a group of radical Christians pledging to murder anyone who had a different religious view than they, we would have a different national security situation,” Cruz said in South Carolina on Sunday.

“But it is precisely the Obama administration’s unwillingness to recognize that or ask those questions that makes them so unable to fight this enemy. Because they pretend as if there is no religious aspect to this,” he said.

Bush said that U.S. assistance to any Middle Eastern refugees should focus primarily on Christians fleeing the violence.

“We should focus our efforts as it relates to refugees on the Christians that are being slaughtered,” Bush told CNN on Sunday.

President Barack Obama criticized the Republican candidates for their calls to keep out Muslim refugees while giving priority to Christians.

“When I hear political leaders suggesting that there should be a religious test for admitting which person fleeing which country,” Obama said at the G20 press conference in Turkey, “when some of these folks themselves come from other countries, that’s shameful. That’s not America. That’s not who we are. We don’t have religious tests to our compassion.”