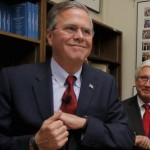 Jeb Bush has vaulted into second place in a New Hampshire poll released on Erev Shabbos.

The telephone poll has a margin of error of 3 percent.