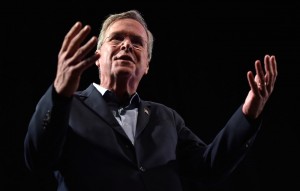 Discussing the government’s response to the terrorism of Sept. 11, 2001, Jeb Bush told a forum in Houston that his brother provided a “case study in leadership” after the attacks on New York City and the Pentagon.

“To create a new narrative on how he led is a joke,” he said. “It reflects a lack of seriousness.”

Trump has said the fact that 9/11 happened on George W. Bush’s watch undercuts Jeb’s statement that his brother “kept us safe” in a time of war.

George W. Bush said 9/11 underscores the need for a president who can deal with unexpected event. He ascribed that quality to his younger brother, saying, “I am absolutely certain given his background and his steadiness that he’d be able to deal with the unexpected.”

In addition, during a discussion of Jeb Bush’s ability to speak Spanish, George W. Bush said his brother “is going to win the Latino vote which is essential to winning” — and added that it’s essential not to “irritate the Latino vote.”

Jeb Bush has attacked Trump’s criticism of some migrants, as well as the businessman’s plan to build a wall along the U.S.-Mexico border and immediately deport migrants who are in the country illegally. Many of Trump’s opponents say he will have a hard time attracting the Hispanic vote, though the businessman has predicted he will carry it.