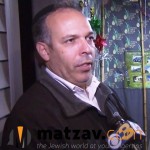 Jackson, NJ – What was supposed to be a happy Yom Tov for a local family is now quite the opposite, after a local township sent out a violation notice, telling the family to take down their sukkah, reports CBS.

“I never had such a thing in my life,” Isaac Ben-Attar told Eyewitness News.

Isaac Ben-Attar lives in Jackson, New Jersey, and he told Eyewitness News he is fuming over a violation that demands he take down his sukkah.

The violation notice told Ben-Attar to take down the sukkah by October 9th. “Failure to make the necessary corrections may result in a summons and additional fines.”

“I was just wondering if someone would decide to put his X-mas tree in the deck, if it’s going to get such a violation. It’s a holiday. I’m sure they know what Sukkah means,” he said.

The violation mentions the word “sukkah.” Ben-Attar said township officials should know it is only temporary.

“It’s a tent and it’s coming down. It’s like the tent I bought from Costco over there to storage my stuff. What’s the difference?” he said.