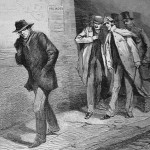 The infamous Victorian-era London serial killer Jack the Ripper was a Jewish barber from Poland, a new book on the 125-year-old mystery claims.

Russell Edwards, author of the book and a self-confessed “armchair detective,” claims that Aaron Kosminski, a 23-year-old Polish-Jewish immigrant, was “definitely, categorically, and absolutely” the man behind the grisly murders of five women in London in 1888.

“I’ve got the only piece of forensic evidence in the whole history of the case,” Edwards said, The Guardian reported. “I’ve spent 14 years working on it, and we have definitively solved the mystery of who Jack the Ripper was.”

Edwards said that a blood-stained shawl he bought in 2007, originally taken from the crime scene of one of Jack the Ripper’s victims, contained DNA evidence that eventually led him to Kosminski, who had been questioned by London police during their search for the killer.

Kosminkski and his family moved to England in 1881 and lived in the Mile End district of East London. He was eventually admitted to several “lunatic asylums” and died in 1899 of gangrene.