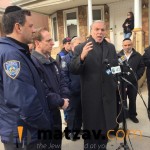 Assemblyman Dov Hikind (D-Brooklyn) urged the community to be on high alert after learning about a second local attack in the past 24 hours. A 17-year-old Jewish male from Flatbush was listening to music while walking home from yeshiva around 6:30 p.m. Monday evening. The attack occurred off Avenue L and East 29th Street. The victim was approached and attacked by an African American described as 5-foot-8 and wearing a black hoodie.

“I’m just in complete shock over the recent spate of violence and brutality,” said Assemblyman Hikind, who said the attack was reminiscent of the 2013 knockout games in Brooklyn. “It’s a shame that we have to worry about what street we’re walking down in such a safe neighborhood.”

“We, as a community, need to be aware and alert of our surroundings,” added Hikind, who visited the victim at his house Tuesday afternoon.

The boy was punched in the face once, knocking him to the ground and out onto the street. He was wearing earphones to listen to his music when the perpetrator approached him, lunging at the youth once he got within arm’s reach. The 17-year-old sustained bruising to the side of his face and is in stable condition.

Hikind reached out to the NYPD 70th Precinct, who responded to the call last night, to ensure all measures were being exhausted to locate and apprehend the perpetrator, as well as to suggest an increase in police patrols throughout the community. “I will do all I can to ensure the residents of this community that they can walk the streets safely,” Hikind said. “I’m confident that the NYPD 70th Precinct and the shomrim will work relentlessly until justice is served.”