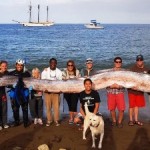 A marine science instructor snorkeling off the Southern California coast spotted something out of a fantasy novel: the silvery carcass of an 5-meter-long, serpent-like oarfish.

Jasmine Santana of the Catalina Island Marine Institute needed more than 15 helpers to drag the giant sea creature to shore on Sunday.

Staffers at the institute are calling it the discovery of a lifetime.

“The last oarfish we saw was three feet long.”

Because oarfish dive more than 914 meters deep, sightings of the creatures are rare and they are largely unstudied, according to CIMI.

The obscure fish apparently died of natural causes. Tissue samples and video footage were sent to be studied by biologists at the University of California, Santa Barbara.