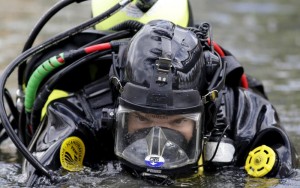 The FBI has recovered items from a lake in which it believes the San Bernardino shooters may have dumped evidence.

The FBI did not provide details or say whether the items found had any connection to the ongoing terror investigation into last week’s mass shooting.

The search of Lake Seccombe comes after the FBI was tipped off that Syed Farook and Tashfeen Malik spent time there, a senior official told ABC. ABC also reports that the FBI is looking specifically for Farook’s hard drive. Read more at ABC News.