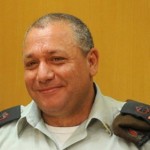 There is no clear military solution for the outbreak of violence that has been convulsing Israel and the Palestinian territories since the Yomim Noraim, IDF  Chief of General Staff Gadi Eizenkot told Israel’s Channel 2 on Thursday.

In his first interview with the Hebrew press since assuming his role in February, Eizenkot said that “a challenge of this kind requires a complex, multi-dimensional response.”

“Our role as the military is to direct the response and restore security and quiet,” he said.

Still, we cannot hide behind the issue that what we have here is a popular, widespread phenomenon, which is being aggravated by external factors. I believe a solution will be found, but it’ll take some time. We have figured out solutions to past waves of terrorism — of suicide bombings, of vehicular attacks and stabbings.

All in all, we have the vast knowledge to deal with such threats, while allowing the political echelon to make its decisions from a position of strength and advantage and not under the pressure of events forcing their [hand].

The chief of staff was responding to the spate of near-daily attacks targeting Israeli security forces and civilians in Israel that have left nine Israelis dead and dozens wounded. Additionally, some 52 Palestinians have been killed — terrorists, demonstrators and bystanders — since the beginning of October.