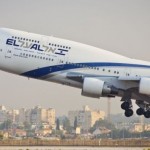 El Al Israel airlines inked a $1.25 billion deal with Boeing to add to its fleet 15 aircraft, among them Boeing’s new Dreamliner jets, in a ceremony at Tel Aviv’s Ben Gurion Airport on Thursday.

The Israeli airline is purchasing nine of Boeing’s state-of-the-art 787 Dreamliner aircraft (with two of them leased) and will lease an additional six aircraft. The 787s will replace the Boeing 747-400s and Boeing 767s already in use.

“To say that [partnership] is something special is a bit of an understatement,” Conner said.