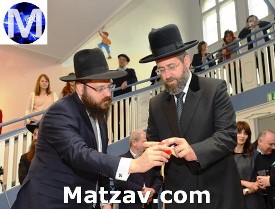 Israel’s Chief Rabbi David Lau began a series of events commemorating the 75th anniversary of Kristallnacht with a visit to a Jewish school in Berlin on Friday morning.

In a speech to the schoolchildren, Rabbi Lau emphasized the importance of Jewish education in Germany: “Man is compared to a tree. Just as a tree needs roots that are deep within the soil, so does a person need deep roots. We, the Jews, have deep roots. You should be very happy that you have somewhere to learn about your heritage.”

In an interview with the German media, Rabbi Lau added, “The connection of the Jews in Germany to their heritage is the appropriate response to the darkness that prevailed here 75 years ago.”

The school that Rabbi Lau visited is the first religious Jewish school established in Germany since World War II. The school opened in 2005, and it has 160 students. During the war, the school building served as offices of the Nazi regime. The schoolchildren greeted the visitors, who also included Rabbi Lau’s wife, Rebbitzen Tzipporah Lau and the director general of the Chief Rabbinate Oded Viner, with the song “Heveinu Shalom Aleichem” in Hebrew and German. At the end of the official ceremony, Rabbi Lau gave a talk on the weekly Torah portion in one of the classrooms.

From there, the visitors went on to the monument on Platform 17 of the Grunwald railway station in Berlin. They were joined by a delegation that included the IDF’s Chief of Staff Lt. Gen. Benny Gantz. There, Rabbi Lau and community leaders Rabbi Teichtel and Rabbi Ehrenberg recited prayers for the six million victims of the Holocaust, and Lt. Gen. Gantz gave a speech in their honor.

Platform 17 at Grunwald station was one of the main points from where the Jews of Berlin were deported to the ghettos in Lodz, Warsaw, and Riga, and later on directly to the concentration camps of Auschwitz and Theresienstadt. Today, the platform is a memorial site.