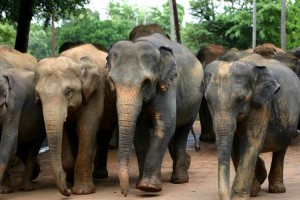 Thai Ambassador to Israel Angsana Sihapitak received a $1,500 donation from the Jerusalem Biblical Zoo for an elephant hospital in Lampang, Thailand. The check was delivered Thursday by an Asian elephant named Tamar, who presented it to the ambassador in her trunk.

“I will forward it to the elephant hospital to Lampang [in accordance with] the objective of this donation,” said Sihapitak, who expressed her gratitude to Israel for helping protect Thai elephants. Asian elephants are an endangered species, according to the International Union for Conservation of Nature.

The Jerusalem Biblical Zoo collected the donation from zoo visitors over a period of three years as part of a lottery contest whose winner would be allowed to spend a day in close proximity to the elephants at the zoo.

“The Thai elephants arrived in Israel only because of the special request made by the late prime minister Yitzhak Rabin to his colleague to bring elephants to the Jerusalem zoo, but [there is] full commitment from the Israeli side to do whatever we can do to promote wildlife conservation in zoos [and] to promote…[the] Asian elephant’s needs for conservation and breeding,” said the Jerusalem zoo’s CEO, Shay Doron, Israel Hayom reported.

“The most important thing about this contribution is not only the amount of money, but the fact that it’s a gift from the children of Jerusalem and the children of Israel. We collected shekel by shekel, dollar by dollar, no one came with big money,” he said.