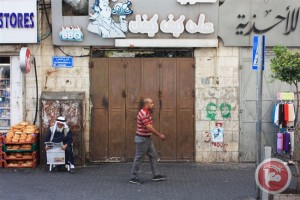 Israeli undercover forces raided the Al-Wehdeh hotel in central Ramallah on Tuesday and detained a Palestinian terrorist who took part in an attack on Israeli forces on Oct. 30 in Nablus.

Locals told Ma’an that Israeli undercover forces smashed the main doors of the hotel before entering the building. They then broke into several rooms before detaining terrorist Basel Fares Ibrahim al-Naasan, 20.

Al-Naasan was shot and injured at the Zatara checkpoint on Oct. 30 while riding with Qassem Mahmoud Sabaneh on a motorcycle after he carried out a terror attack.

An Israeli army spokesperson said at the time that two Palestinians – one of whom was Al-Naasan – tried to stab an Israeli border policeman at the checkpoint south of Nablus.