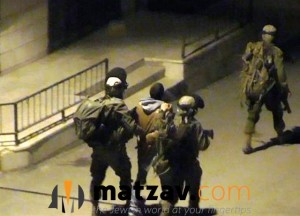 Israeli forces detained at least 15 Palestinians and seized a number of weapons in predawn raids across the West Bank.

An Israeli army spokesperson confirmed nine detentions in Bais Lechem and said that Israeli forces also detained one Palestinian from Tulkarem district, two from Nablus, two from Qalqiliya, and one from Ramallah.

She said that one Palestinian in Nablus and another in Ramallah were “Hamas operatives,” while the others were detained for “illegal activity.”

She added that a weapons cache comprising one M16 rifle, one pistol, and ammunition had been discovered in the village of Artah in Tulkarem.