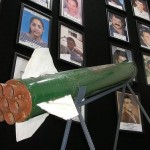 “Rocket attacks against unprotected Israeli civilians who do not pose a concrete military threat are a clear violation of international law and impose individual criminal responsibility on the perpetrators of the launchings,” the paper said.

The document argued that it was permissible for Israel to attack civilian structures that Hamas had turned into weapons storehouses and meeting places if there was proof that they were being used for military purposes and if their destruction would give Israel a clear military advantage.