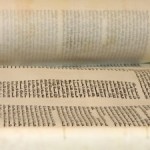 An Israeli team hopes to send a Sefer Torah to the moon’s surface in an effort to preserve a part of Jewish culture in case of an apocalypse, Britain’s Daily Mail reported on Friday.

The Torah would travel outside Earth’s atmosphere with other Earth artifacts as part of the Google Lunar XPrize mission, a competition among private companies to send vehicles to the moon with the goal of maintaining Earth’s relics beyond a world-ending event, such as a nuclear war. The Torah would be transported in a capsule enabling it to survive on the moon for more than 10,000 years, the Daily Mail noted.

The project has been named ‘Torah on the Moon.’

The Tel Aviv-based team behind the idea is hoping to later send the Vedas (Hindu scriptures) and the I-Ching (an ancient Chinese philosophical work). Each would be transported in the same type of capsule used for the Torah.

“This is an incredible, beautiful project,” said group founder Paul Aouizerate. “These three texts are among Earth’s most ancient documents, created over 3,000 years ago. They are significant to billions of people.”

Aouizerate and his team are hoping to raise up to $20.5 million for their Torah mission.

The group’s efforts to create a capsule that can withstand the extreme temperatures on the moon may prove difficult, the Daily Mail reported. In sunlight, the lunarsurface can reach 253°F, but at night it plummets to -279°F. A previous attempt by the Ecological Society of America to make a capsule that would keep the Torah safe failed to withstand the moon’s temperature swing.

The team has yet to book a flight to the moon. It had initially intended to join a lander being built by Israel-based SpaceIL, but the partnership failed. Aouizerate and his colleagues are now calling out to the Spain-based Barcelona Moon Team to see if they will take the artifacts, but there has been no confirmation of an agreement yet.

The endeavor to preserve Earth’s culture has been considered in the past, with organizations saying humanity should create “time capsules” that will preserve Earth’s artifacts. NASA’s two Voyager spacecraft currently on their way into interstellar space each contain the Golden Record, a vinyl of various snippets of Earth life and culture, from the sounds of nature to images of humans. The collection is intended to be a lasting legacy of humanity’s place in the universe, the Daily Mail noted.

Sending sacred texts to space has been done before. NASA stirred outrage among atheists when the Apollo 8 astronauts read from Sefer Bereishis as they orbited the moon in 1968. The Apollo 15 astronauts left a bible on their lunar rover when they left the moon in July 1971.