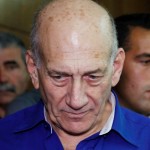 Former Israeli Prime Minister Ehud Olmert will appear in front of the Supreme Court tomorrow for a hearing on his appeal in the Holyland Case. An expanded panel of five Supreme Court judges will rule definitively tomorrow whether Olmert will go to prison for six years, or whether he will be partially or fully acquitted.

Judges Salim Joubran, Neal Hendel, Uzi Fogelman, Yitzchak Amit and Zvi Zilbertal will have to determine whether the evidence presented against Olmert was unequivocal or not. The Supreme Court will be forced to either fully accept Olmert’s appeal and acquit him, partially accept the appeal and acquit him of one of the charges of bribery, leave the conviction as is but ease Olmert’s sentence, or fully reject his appeal.

If his appeal is to be rejected, Olmert will receive a date at which he is to enter prison after the hearing. The former Prime Minister’s attorneys will most probably claim that he will require several weeks before reporting to prison.

Other convicted persons in the case such as Danny Dankner and Holyland Park Ltd will also appear before the court tomorrow to hear whether their appeals are accepted. None of those convicted in the case have served their sentence thus far other than Shula Zaken, who served as Olmert’s secretary and has already finished serving her prison sentence, which was determined in a plea bargain.

In May 2014, District Court Judge David Rozen sentenced Olmert to six years’ imprisonment, with two more years on probation in addition to a financial penalty. Olmert was convicted on two accounts of taking bribes in the Holyland Case. He was initially set to start serving his sentence on September of 2014, but the date was postponed following his appeal.