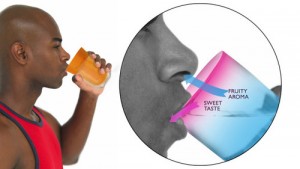 An Israeli start-up company called The Right Cup has developed a fruit-scented cup that tricks the brain into thinking it is drinking juice instead of plain water.

The company said it has been able to take fruit flavors, which beverage companies use in their drinks, and safely insert them directly into the cup instead of the drink.

“Our unique design positions your nose right over the opening, so your nose fully picks up the fruit aroma while your tongue flirts with a hint of sweet taste,” a company promotion said.

The Right Cup recently launched a crowdfunding campaign on Indiegogo that sought to raise $50,000. But as of Dec. 2, the campaign has raised nearly $109,000.

Isaac Lavi, co-founder and CEO of The Right Cup, said he was inspired to create the product after being diagnosed with diabetes at age 30.

“My doctors advised me to stay away from sugary beverages and to drink only plain water. This was very hard because I hated the taste, or actually the lack of taste,” Lavi told Mashable.

The company sees the cup as a simple alternative to get people to drink less sugary beverages like soda and juice, which experts point to as a significant cause of rising diabetes and obesity levels. The Right Cup also hopes it can help increase water intake and reduce plastic bottle waste.

The scented cup will initially come in four flavors—mixed berry, orange, apple, and lemon lime—and will retail for $35 sometime next year.