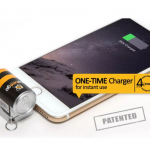 The Israeli start-up mobeego launched an inexpensive disposable cellphone charger in Israel and abroad on Monday.

Mobeego’s self-described “energy drink for the mobile phone” can be charged up to four hours and costs about 10 Israeli shekels—or roughly $2.50. The design of the charger looks like an energy drink can and is an environmentally friendly alternative for Android and Apple IOS smartphones as well as most older cellphone models. Users can throw away the charger at a mobeego-designated point of sale.

Mobeego, founded in 2014 by Israeli entrepreneurs, plans to set up franchises globally, particularly in developed countries. They are currently in negotiations with the United States, Israel, Germany, France, and South Africa to distribute and sell hundreds of thousands of chargers in months and millions per year.

A newer model in the works will allow for customers to receive a deposit back when they recycle the battery.