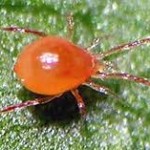 Little spider mites that harm plants and crops in Colombia will soon meet their match – and their maker – when Israeli-produced carnivorous spiders are deployed to destroy their colonies.

In a new deal, Israeli biotech firm BioBee will send 600 million spider mites to Colombian farmers to help them battle the spider mites that threaten, among other things, Colombia’s biggest cash crop – coffee.

The spiders, raised at BioBee’s Jordan Valley facility, are spider mites themselves – but are twice the size of the mites they will be attacking. And they’re not interested in the leaves of plants that the Red Spider Mites attack – they eat the attacking mites themselves.

While the usual method of battling the scourge is through pesticides, an ongoing attack by the destructive mites has stretched the limits of pesticide application; any more, and the coffee and other crops the farmers export to the United States will be rejected. In addition, the more pesticides that are applied, the more the predatory mites build up resistance, said BioBee.

The company offers what it believes is a much better solution – the elimination of the mites by natural means. BioBee’s Bio Persimilis are specially raised via natural selection (not genetic manipulation) to produce very big and very hungry spider mites that the company has convinced Colombian agricultural authorities will take care of the problem.

Bio Persimilis is just one of many “bug products” the company develops. Several years ago, for example, the company introduced a patented parasitic wasps for the control of mealybugs, a pest that infests a wide range of houseplants and greenhouse plants. The wasps “are shipped in mummified form, using a patented production and packaging methods, and as a result they are more robust and dependable” than ordinary wasps.

Last year, the company shipped 400 million sterile flies to the Balkans, where they were set out in citrus groves along the border of Croatia and Bosnia, in order to battle the dreaded Mediterranean fruit fly. Those flies were zapped with a dose of atomic medicine (under the supervision of the Israeli Commission on Atomic Energy), in order to prevent them from multiplying. According to the company, the project has been very successful.

BioBee is optimistic that its spider solution will help Colombian farmers as well. “Our spider mites naturally decimate the predatory mites that have been damaging wide areas of Colombian agricultural areas,” the company said. “With our product, farmers will be able to reduce the amount of pesticides they use, and thus meet international standards for export.”