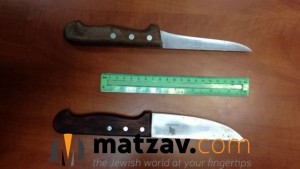 Two Palestinian teens, both around 15 years old, were detained near the Old City of Yerushalayim on Monday after knives were found on their person, the third such incident in the day.

Police officers became suspicious of the teenagers and accosted them at which point they noticed a blunt object hidden underneath the clothes of one of them.

The cops frisked the suspects and found they were carrying knives. They were taken away for further interrogation.

The arrests came hours before an East Jerusalem teen pulled a knife on cops, who then shot him after a short chase. One person was lightly injured and a second person was treated for shock.

Earlier in the day, Border Police officers arrested a 26-year-old Palestinian resident of Jenin who arrived at the Tapuach checkpoint in the northern West Bank with a knife on his person, police said.

Earlier Monday, IDF soldiers arrested a Palestinian man in Hawara, just over four kilometers (2.5 miles) away, after a security inspection revealed that he was carrying a large kitchen knife, the IDF said. Read more at Times of Israel.