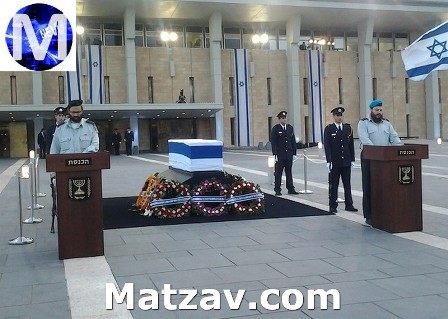 On Sunday, thousands gathered to pay their last respects to Israel’s eleventh prime minister and brilliant military strategist, Ariel Sharon, who passed away on Shabbos  after spending the last eight years of his life in a coma following a stroke in 2006.

Sharon’s casket was placed in the Knesset in an area open to the public from morning until evening. Young children and the elderly; religious and secular; right-wingers and left-wingers, were among those that made up the diverse crowd that came to pay tribute tothe leader known by the Israeli public and media as Arik.

“He was the people’s leader,” said Marcelle Romano, a grandmother originally from Sderot. “I remember seeing Arik in Sderot on many occasions. My neighbor, Kochava Haroush worked on his ranch as a cook and housekeeper for many years,” Marcelle told Tazpit News Agency. “In Sderot, we loved him – he was bigger than life. ”

Sharon, who was elected Israel’s prime minister from 2001 to 2006, made his family’s home on a sheep farm known as Sycamore Ranch in the western Negev desert near Sderot. Following the controversial Israeli disengagement from the Gaza Strip, implemented by then PM Sharon in 2005 – a Qassam rocket fired from Gaza struck his family’s ranch in 2007.

As a great commander and later Israeli general, Sharon is remembered by many who fought with him in battle or served under his command during Israel’s War of Independence in 1948, the 1967 War and the Yom Kippur War in 1973.

Navot, whose father served under Sharon, came to pay his respects to the late prime minister at the Knesset on Sunday. Holding a photo of his father and a military conduct ledger that Sharon himself had signed for his dad dating back to 1954, Navot explained that Sharon was a respected figure in his household. “My father served with him in the paratroopers unit. We grew up seeing Sharon as an incredible role model,” Navot told Tazpit.

Twenty-three delegations from around the world, which include 100 people, are expected to participate in Monday’s funeral procession for the former prime minister.

US Secretary of State John Kerry also commented on Sharon, stating that: “During his years in politics, it is no secret that there were times the United States had differences with him. But whether you agreed or disagreed with his positions – and Arik was always crystal clear about where he stood – you admired the man who was determined to ensure the security and survival of the Jewish State.”
Sharon will be laid to rest at Sycamore Ranch at 2:00 P.M. tomorrow, next to his wife Lily, in a military funeral with eight IDF generals accompanying his coffin from the Knesset in Jerusalem to Anemone Hill in the Negev.

But for today, Sharon’s memorial remained accessible to the people at large. “I am happy that I was able to pay my respects to Sharon,” said Romano from Sderot. “It’s an honor for me to be able to say goodbye to one of Israel’s greatest leaders in modern history.”