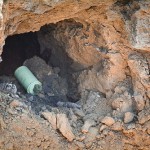 Israel has received intelligence indicating that Hamas has begun reconstructing the attack tunnels destroyed during the Gaza war, a senior Israeli official said this week.

The official said that Hamas has returned to arms smuggling through several tunnels under the Egyptian border.

The official added that production of M75 rockets – capable of reaching Tel Aviv – has resumed inside Gaza, where, 40% of Hamas’ capability to produce rockets remains intact.